This book is the inspiration for the title of this post, and also for my desire to befriend a snail. I highly recommend both the snail friendship and the book.

Earlier today out on my balcony, I noticed a small snail stuck to our hanging bird decor. I plucked the shell from the wood and peered inside.

Back in the house, I held the snail in my palm, misted it with a bit of water, and placed it in a plant pot. I put a seed husk next to the shell so I would know if the critter moved.

I went back to work.

An hour later I remembered with a jolt. The snail! It hadn’t moved.

An hour after that I checked again. Yay! The snail was out in all it’s alien-eyed, sparkling-snot glory. A glistening layer of slime on the soil surrounding the shell reminded of my favorite quote from the book:

“Slime is the sticky essence of a gastropod’s soul.” -Elisabeth Tova Bailey

I rummaged through the trash until I found an egg shell from last night’s dinner, crushed it up with my fingers and sprinkled the crumbs on the soil. The hungry snail went straight for a small piece! I watched in utter fascination as this very squishy creature devoured a crunchy bit of food with body parts I could barely understand.

Once satiated, the little mollusk traveled up the side of the pot… 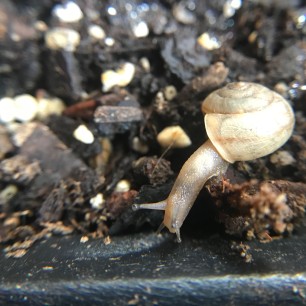 …and settled right into the groove at the top. It’s still napping next to the pawpaw seedling as I type this. I’ll put it back outside soon, but I’m reluctant to bid the charming gastropod goodbye.

Watching snails eat is HIGHLY underrated. I couldn’t hear this one eating but I’ll try again someday- if I’m lucky it will be wild food too!

I am a self-proclaimed 'almost anthropologist' because I KIND OF read, think, and write like an anthropologist...but not quite. I love anthropology and have two degrees in it, but I am also interested in wildlife conservation, religion, writing, environmental education, poetry, children's literature, etc. Sometimes my perspective tends more toward the spiritual/creative realm than the scientific. You have been warned! :) View all posts by AlmostAnthropology