I haven’t blogged about my trip to India yet! The most exciting wildlife sighting for me, other than langurs for the first time in Great Himalayan National Park (sorry, no good photos!), was rhesus macaques! Until September, I had only observed rhesus macaques along the Silver River in central Florida. Here is a quick overview of my encounters with them in their ‘native’ habitat in Himachal Pradesh, as some would argue, where they belong…*

A closed yarn shop taunted me as we waited for the bus for an hour in dusty streets. As soon as we boarded, Vishu fell asleep and I stared out the window.

We were somewhere between Aut and Mandi, on the way to Dharamshala. I wasn’t necessarily expecting to see monkeys along the road, but suddenly, there was a single male standing on a rock. Then it was gone. There and then not, just like the Hanuman statue we passed moments before.

Later, I saw two more monkeys. Then a whole group perched on and around the concrete barriers that kept our bus from tumbling over the cliff. Their rusty brownish-grey coats matched the color of the Beas River below. A female groomed an infant.

I saw another soon after we stopped for a snack of Magic Masala chips and mango juice. We drove past two groups as we approached Dharamshala.

The next day we saw two macaques at the Dalai Lama temple. 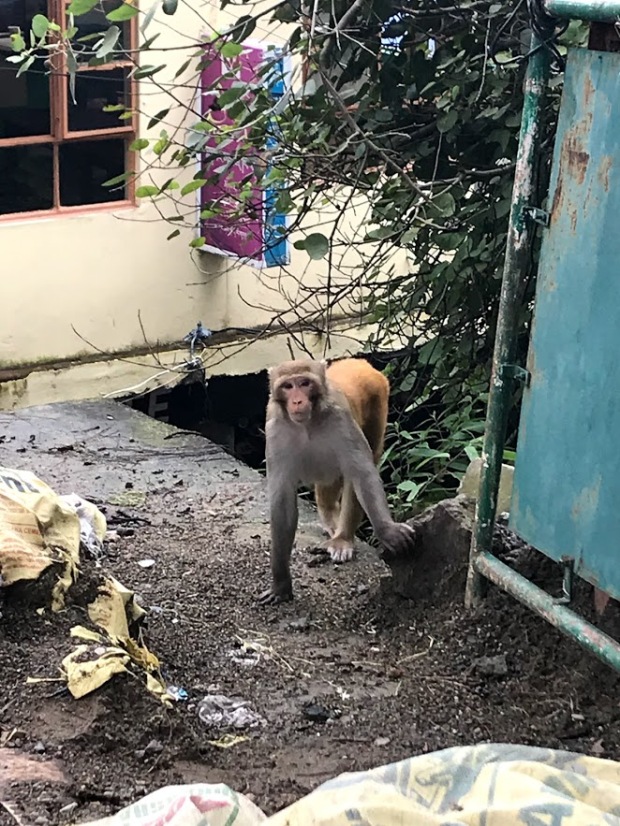 Next, we visited Dal Lake which turned out to be more of a mud puddle than a lake- but there were monkeys! I watched them for about thirty minutes while Vishu rested on a bench and anxiously questioned whether I was getting too close.

“Why don’t you trust that I know what I’m doing?” I asked.

“I trust you. I don’t trust them.” He gestured at the monkeys.

As you can see from the poor-quality photos, indeed I kept my distance.

The monkeys were less concerned about our presence as my husband was about theirs. They did all the stereotypical Indian monkey things- ate from trashed chip bags, peered into temples, milled about among the cows to the distant sound of beating drums. There was grooming and playing and climbing of poles. 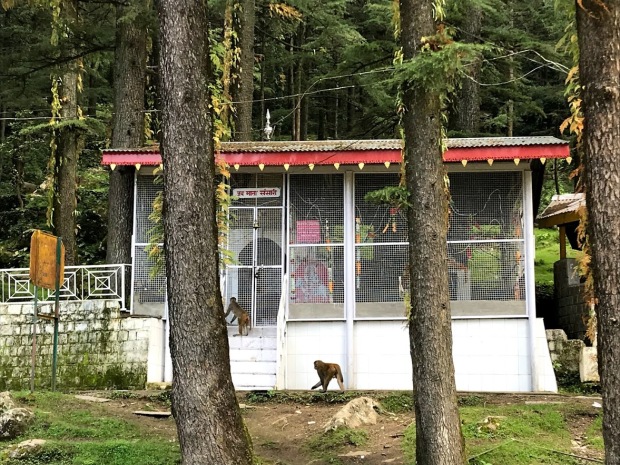 I did not see a birthday monkey** the next day, but my quest to see macaques in India was complete!

*Intrigued? You’ll have to read the book I’m writing 🙂

**Birthday monkey: A monkey you see on your birthday, of course! Like Vishu’s birthday black bear or our Christmas coyote!

I am a self-proclaimed 'almost anthropologist' because I KIND OF read, think, and write like an anthropologist...but not quite. I love anthropology and have two degrees in it, but I am also interested in wildlife conservation, religion, writing, environmental education, poetry, children's literature, etc. Sometimes my perspective tends more toward the spiritual/creative realm than the scientific. You have been warned! :) View all posts by AlmostAnthropology